Thanks to everyone who participated in this year’s Orca Run! Together the donations from runners and organizer Orca Running totaled $5,500. A new record! We are so grateful for your support and are really sorry we couldn’t greet you at the finish line this year. COVID-19 changed the format of the race, but not its spirit!

The Whale Trail has been the non-profit partner for the annual event since it began in 2016. The course follows the West Seattle shoreline, and passes four Whale Trail signs along the way.

Participants run or walk for individual orcas, whose life history is printed on their race bibs! It’s a great way to connect people to the southern resident orcas and their plight, and has become a signature feature of the race. Our booth at the finish line is swamped by people wanting to learn more about the orcas and their families. 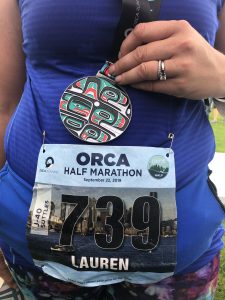 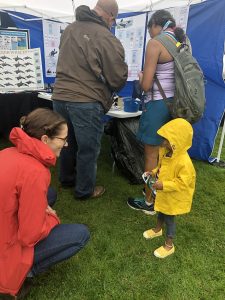 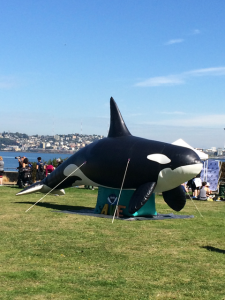 Whale Trail volunteers play a key role in the race, from staffing water tables  and handing out medals at the finish line to helping runners take pictures with Mike, and making sure he has a steady supply of inflatable salmon 😉 Thanks to all of you who have volunteered throughout the years! Shout out to members of the West Seattle Timebank, who always come through for us. 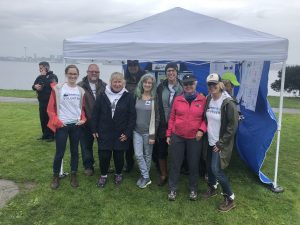 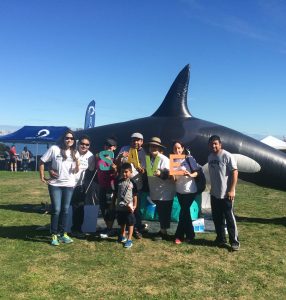 Last year was the soggiest yet, with most of the race happening in a downpour.  And it was the first year that orcas showed up for the Orca Run! K pod rounded Alki Point a few hours after the race ended.

This year the race was planned to expand to two days, and doubled the number of participants. We were joined by another nonprofit partner, Long Live the Kings, whose focus is on restoring and ensuring abundant prey for the southern residents. Together, we all have a piece of the puzzle to protect the orcas!

Whale-sized thanks to every one who walked or ran for the orcas, and especially to everyone at Orca Running for your friendship and support these many years. We’re already looking forward to next year!

Running for Orcas, (Washington Department of Fish and Wildlife, 2019)