The Southern Resident Killer Whales (SRKW) are a group of orcas comprised of three pods or family groups: J,K, and L pods. As November 2018, there are 74 individuals – J pod currently has 21 members, K pod has 18, and L pod has 35. 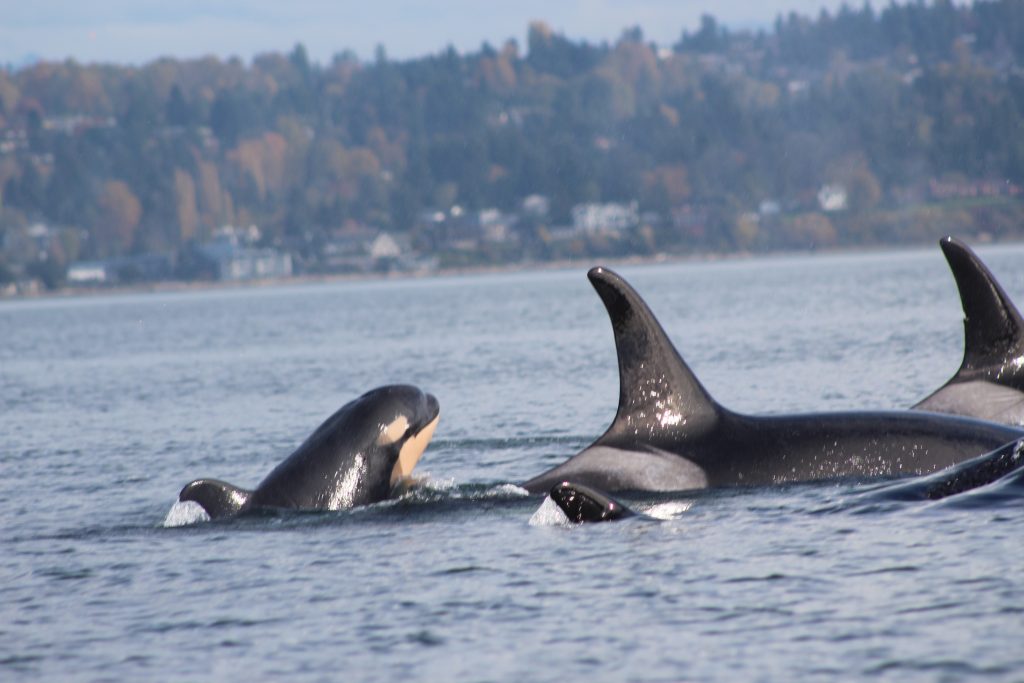 Around the San Juan Islands, lower Puget Sound, the Strait of Georgia and the Southern Canadian Gulf Islands, J pod is the most likely to be in the waters year-round. Historically, J pod has been known to frequent the west side of San Juan Island, in Haro Strait...
Read More 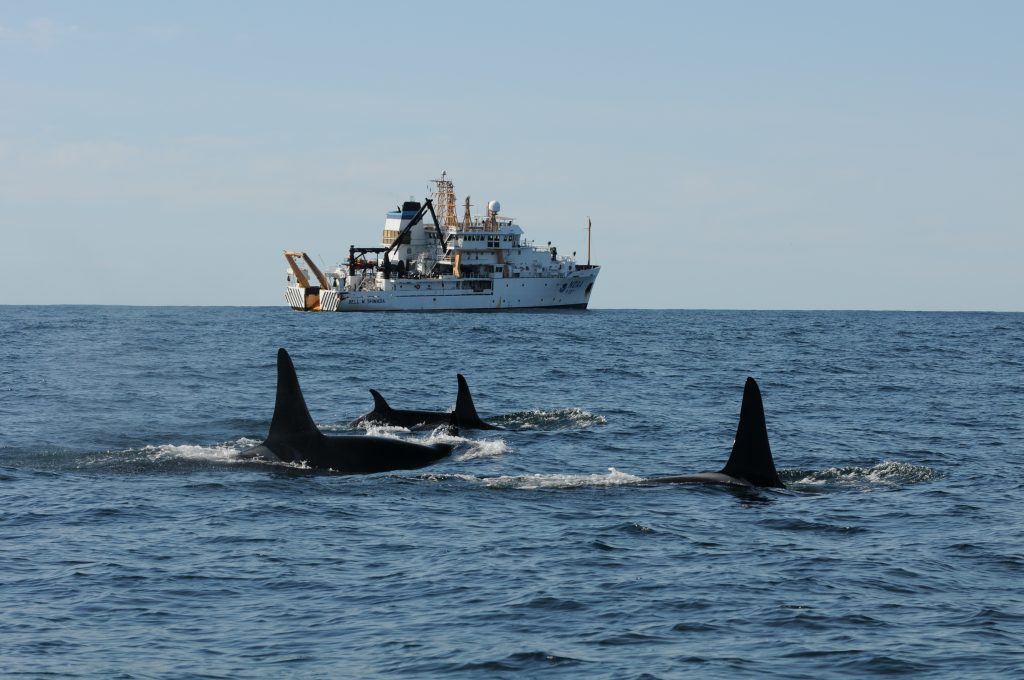 K pod is the smallest of the three Southern Resident Killer Whales pods with only 18 members. The oldest female is K12 Sequim, who is thought to be 48 years old and have three living offspring and is a grandmother to K33, Tika. K pod has three mature...
Read More 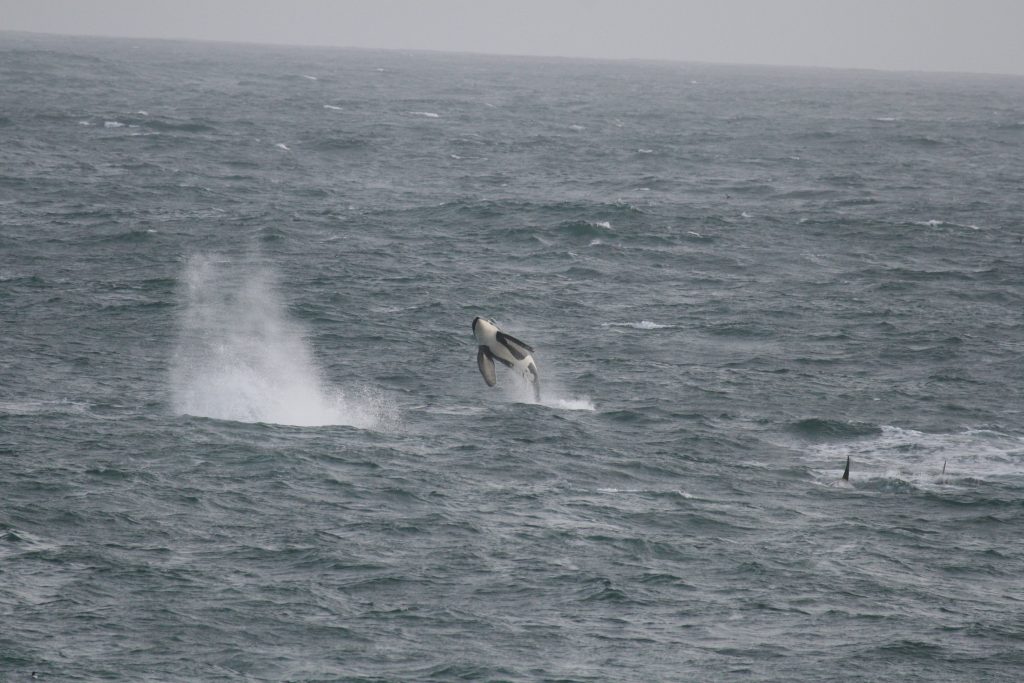 When all three pods unite, usually in the beginning of the summer after returning from a winter in search for food, members from each pod will interact with one another and this is called a super pod. Killer whale’s movement patterns are dependent on the movement patterns of their food source. Unlike transient orcas, the marine-mammal diet orcas, SRKW feed primarily on Chinook salmon. Orcas have been an important part of the tribal culture of thousands of years and are an iconic megafauna of the Pacific Northwest.

Orcas are best spotted by their dorsal fins which can be as tall as 6 feet on males, and 2 to 3 feet on females. Watch for their blows, which are low and bushy compared to baleen whales. The number of whales is also a clue – resident orcas are tightly bonded to their families and travel in larger groups than Biggs orcas (generally).

Throughout the year, keep your eyes open for southern residents along the Pacific Coast from Uclulet BC to Monterey CA.

The Southern Residents usually spend the summer months in and around Washington State and southwest British Columbia. In the winter, the orca’s main food source, Chinook salmon become less abundant and the whales travel and expand their range in search of food. L and K pods are known to travel to the northern coast of California in the winter months and J pod normally stays closer to the Salish Sea. The SRKW will travel as far south as Monterey Bay, California and north towards Haida Gwaii but have also been seen as far north as Alaska.

There are three kinds of orcas that live in the Pacific Northwest, differentiated by diet, social structure and range. The other two orcas are transients, who eat marine mammals, travel in smaller family groups, and have a wider ranger with a less predictable travel patterns. The third group is the offshores who live in the open ocean and eat sharks. They are the least likely kind of orca to be found in the Salish Sea. These groups are genetically distinct and are not believe to interbreed.

Killer whales are in the family Delphinidae and are the largest species of dolphin. They are also the most widely distributed marine mammal world wide. The Southern Residents got their name from inhabiting the waters off the southern end of Vancouver Island and the inland waters of Washington, in comparison to the Northern Resident Killer Whales who are most likely encountered in the waters off the northern end of Vancouver Island and range to Haida Gwaii and Southeast Alaska.

SRKW can travel as fast as 30 miles per hour (48 km) and are able to sustain an average speed of just over 6 knots (8 mph/12.8 km per hour). They travel an average of 75 miles (120 kilometers) in a single day, and that travel is usually, if not always, with their pods and matriarch lineages. Each orca can be identified by their individual markings, called saddle patches, which is located behind the dorsal fin. Orcas have the second largest brain at around 17 pounds, second to the sperm whale.

Southern Resident Killer Whales form lifetime bonds within their family groups and will stay in their mother’s pods for life. Within the SRKW there are three pods, J, K, L, each with sub-pods or family groups, centered around the eldest female who is usually in charge of the group. They will remain in close association with this pod and travel together. Orcas can be seen in their smaller matrilineal groups, around 10 animals, or in larger pods and super pods, upwards to 50 orcas. Like other toothed whales, orcas communicate extensively using echolocation. Echolocation is sound produced underwater for the purpose of navigating, locating prey, communication and feeding. The sounds are made in clicks, whistles, or pulsed calls. The clicks are thought to be used more for locating prey and navigating, where the whistles and pulses are more for social interactions. These are the calls more likely to be heard on a hydrophone. Each pod has a unique dialect, or repertoire, of calls to communicate with one another, however, there are some calls that are the same between all three pods. The calls are learned and culturally transmitted between generations. Orca echolocation and communication calls can travel for over 10 miles under water.

The Southern Resident Killer Whales eat mainly chinook salmon. Orcas need to eat around 200-300 pounds (kg) of food each day, which is around 4% of their overall body weight. SRKW are known to cooperatively hunt for prey and share prey between the family groups and within the pod.

Diet is a main factor that sets apart the three ecotypes of orcas found in and around the Pacific Northwest. The transient orcas eat marine mammals and the offshore orcas eat sharks.

Like other cetaceans, orcas exhibit a wide range of behaviors, like breaching, spyhopping, porpoising, kelping, tail-lobbing and resting. Breaching is when an orca leaps fully out of the water, often making a spectacular splash when it falls back in. Spyhopping is when an orca lifts it head above the surface, and has a look around. An orca’s eyesight is as good as a human’s! When orcas porpoise, they swim rapidly along the surface of the water. Resident orcas often play with kelp as they swim through the giant kelp beds around the Pacific Northwest. This behavior has been observed so often that it’s come to be known as kelping. Orcas slap their tails against the surface of the water, creating a percussive sound that can be heard for miles. This behavior is called tail-lobbing. Sometimes they also slap their pectoral fins against the water; this is called a pec slap. When orcas rest, they often line up side by side, in a formation known as a resting line. Like other cetaceans, they are conscious breathers and must stay awake to breathe. Though they rest, they never fall fully asleep like humans.

The Southern Resident Killer Whales are listed as an endangered species in the US and Canada. The population is in crisis, nearing their historical low size of just 71 individuals.

The main threats facing the Southern Resident Killer Whales are prey abundance, disturbance from vessel traffic and shipping, and bioaccumulation of persistent biochemicals.

Resident orcas rely heavily on salmon, specifically Chinook salmon, which have been declining for years throughout their range. Orcas depend on salmon that comes from the Sacramento, Klamath, Snake/Columbia and Fraser River, and the whole of Puget Sound. Prey abundance is impacted by habitat, hatcheries, hydropower, harvest, predation, and forest fish.

Orcas are acoustic animals. Vessel noise and disturbance make it harder for the whales to forage, rest and socialize. The number of boats nearby the whales is also harmful as the presence of boats modifies and changes the whales’ behavior.

Orca and all marine mammals are affected by the high levels of environmental pollutants, such as PCB’s and flame retardants. These effects cause issues within the immune and reproductive systems and toxins are transferred from mother to offspring. An oil spill in the Salish Sea would be detrimental to this population.

Another threat, perhaps the most important to the SRKW, is the low population number. There are few females alive that are within reproductive ages as well as mature males that are capable of producing offspring and contributing to the population. With such a low number of females able to give birth, in combination with the low calf survival rate and the other threats listed, we must give the southern residents the greatest level of protection and the best chance at surviving.