Orcas are the top predator in the sea, and the largest member of the dolphin family. Also known as killer whales, they are icons of the Pacific Northwest, and the signature species of The Whale Trail.

Three kinds of orcas live in the Pacific Northwest, differentiated by diet, social structure and range. 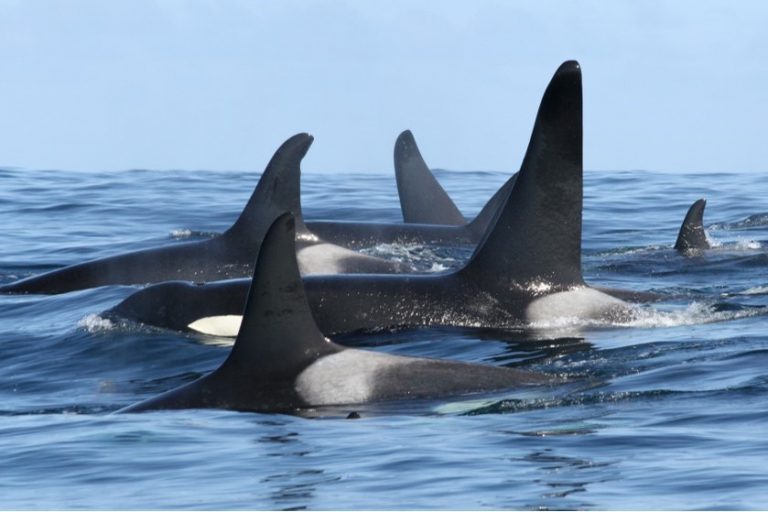 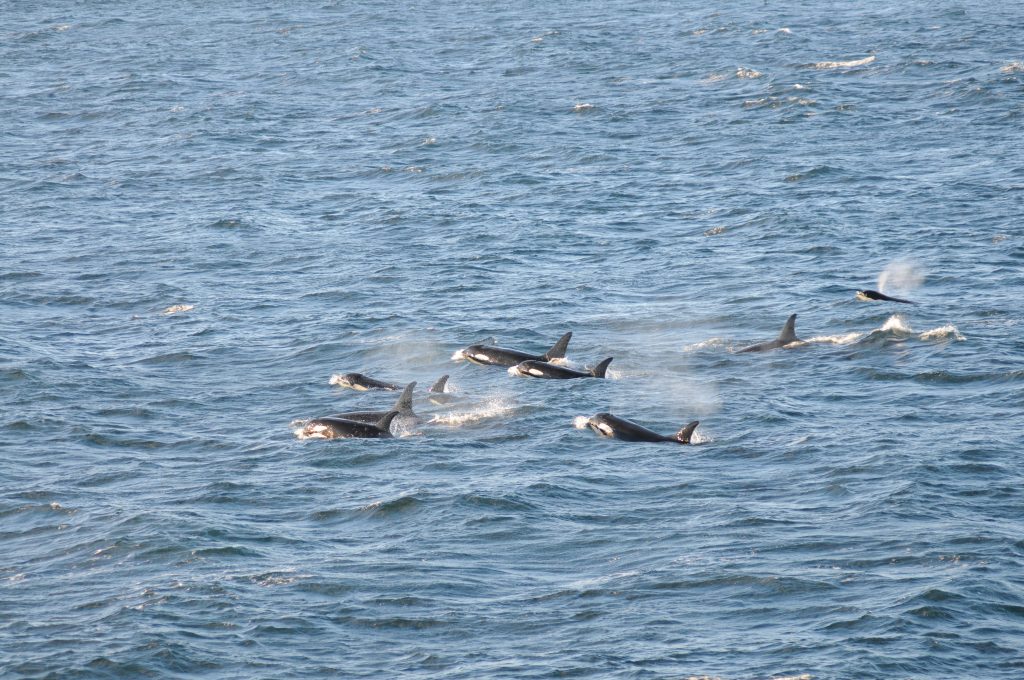 The Southern Resident Killer Whales (SRKW) are a group of orcas comprised of three pods or family groups. These pods are J,K, and L, and as of December 2017, there were 76 SRKW. J pod currently has 23 members, K pod has 18, and L pod has 35.
Read More 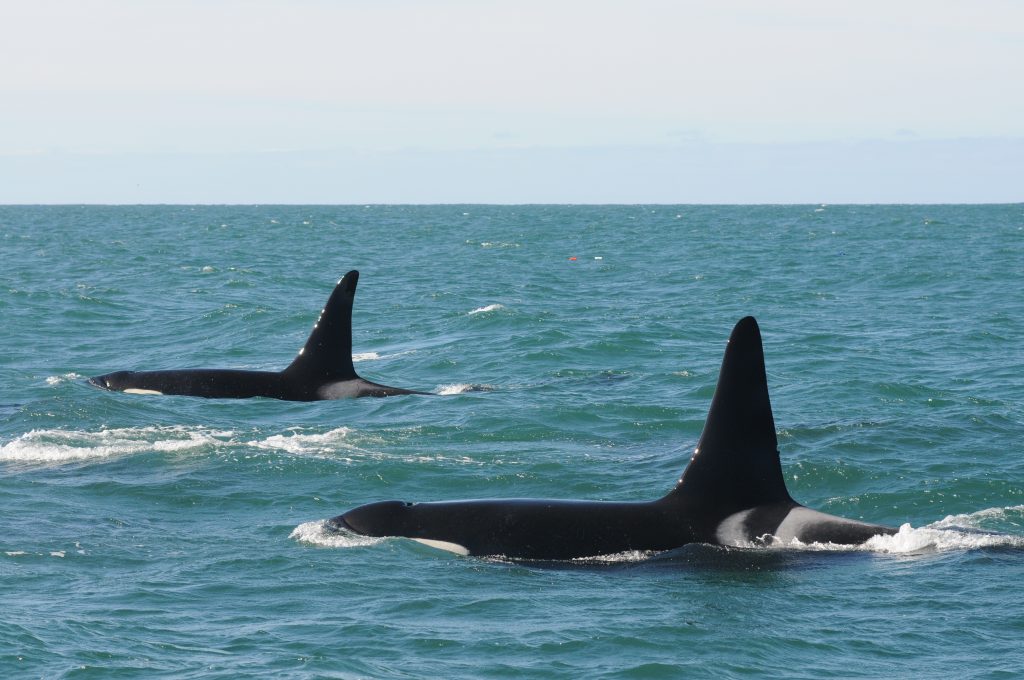 Transient pods are typically smaller than resident pods. Transients are also less vocal, and tend to hunt quietly. Unlike fish, mammals have excellent hearing, making it essential for transient orcas to travel in quiet and stealthy groups. Transients...
Read More

These groups are genetically distinct, and are not believed to interbreed.

The resident orcas of the Pacific Northwest are one of the most well-studied groups of animals in the world. Other studies are currently underway with orca populations in Argentina, New Zealand, Antarctica, Norway, and Russia.

Orcas are best spotted by their dorsal fins which can be as tall as 6 feet on males, and 2 to 3 feet on females.

Watch for their blows, which are low and bushy compared to baleen whales.

The number of whales is also a clue – resident orcas are tightly bonded to their families and travel in larger groups than Biggs orcas (generally).

Orcas are the largest member of the dolphin family, and display a wide variety of surface behaviors. You might see them breach, or spyhop, or roll on their sides and slap their pectoral fins.

Orcas work together to catch their prey. If you see them spread out and circling with their dorsal fins angled, they might be foraging for salmon or seals.

Throughout the year, keep your eyes open for southern residents along the Pacific Coast from Uclulet BC to Monterey CA. They forage on salmon that comes from the Sacramento, Klamath, Snake/Columbia and Fraser Rivers, and the whole of Puget Sound.

Biggs orcas travel patterns are less predictable. They forage along the Pacific Coast from California to Alaska, are increasingly seen throughout the Salish Sea. Less commonly seen from shore, Biggs orcas are found in the Channel Islands, Monterey Bay, the Gulf of the Farallones and near Tofino. Biggs pods are specialized to hunt prey such as grey whales, seals, and sharks.

Their distinctive black and white coloring makes orcas instantly recognizable the world over. The white pattern on the underside of an orca is different between males and females. Other key features are as follows:

Orcas are the top predator of the sea. Their preferred prey differs between ecotypes. For example, resident orcas eat fish, while transient and offshores eat marine mammals. This difference in diet and hunting strategies may have evolved to allow different kinds of orcas to share overlapping ranges, and not compete for the same food.

What orcas eat, and how they catch it, is cultural. Orcas teach their offspring both what to eat and how to hunt.

Orcas at Risk! Some cetaceans are now facing an uncertain future because their populations have declined to the point that there are only few of them left in the world. Southern Resident orcas are listed as an endangered species in both the US and Canada.

Over all the world’s oceans, it is believed there are more than 50000 orcas. Looking at all ecotypes of orcas, orcas are the most widespread and one of the most populous of all marine mammals

Orcas are extremely social animals.  They live in tightly bound units called pods. At certain times of the year, multiple pods come together to form superpods, where mating and other social behaviors are often observed.

Like other cetaceans, orcas exhibit a wide range of behaviors, like breaching, spyhopping, porpoising, kelping, tail-lobbing and resting.