Harbor seals are the most common marine mammal along the Pacific Coast. They are generally blue-grey with light and dark speckles on their body.

Harbor seals are part of the “true seal” family called Phocidae. This means they lack external ear flaps, and have short forelimbs, which restricts their movement on land.

Harbor seals will haul on on land to rest and can be seen with head and flippers elevated, resembling a banana. They haul out to rest, for thermal regulation, to give birth, social interaction, and avoid predators. It is common to see harbor seals congregate at desirable “haulouts” or resting places.

You have a higher chance of spotting harbor seals when looking at rocky shorelines, especially rocks that are exposed at low tide. You can also see them swimming in the water and most of the time you can spot their head and body hovering at the surface. 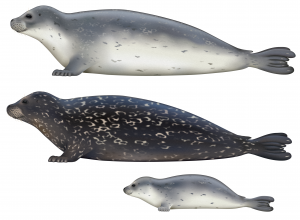 There is a good chance you can spot a harbor seal at all sites, year round, along The Whale Trail.

Harbor seals live in coastal and estuarine areas throughout the North Pacific and North Atlantic oceans. They spend equal time on land and in the water and can occasionally be found in inland waterways and lakes.

Harbor seals are considered “true seals”.  They wriggle on their bellies to move, do not have external ears, and use their rear flippers to propel themselves through the water, unlike sea lions which are not considered true seals.

Harbor seals sleep on land or just below the water surface. When sleeping underwater they will come up to breathe every 5-10 minutes without waking up. They must voluntarily open their nostrils in order to breathe.

Harbor seals eat 7-10% of their body weight daily. When hunting they can dive up to 1,000 feet for as long as 23 minutes. They prey on several species of fish, such as pollack, flounder, cod, salmon, and also have been known to each squid and octopus. Harbor seals have been documented eating 77 different species of fish in the Puget Sound area and 60 different species in and near the Columbia River. Their front teeth are pointed and sharp which assist to catch, tear and swallow prey opposed to holding and chewing prey.

From 1947 to 1960 bounties were placed on harbor seals in Washington due to the perceived damage caused by them on the salmon fisheries. After roughly 17,000 were killed, with no apparent improvement to commercial fisheries, the bounty was discontinued. They are protected under the Marine Mammal Protection Act and their numbers have rebounded.

A main threat for harbor seals, especially in urban environments such as the Salish Sea, is the accumulation of toxins, like PCBs and PDBEs in their bodies, from their prey. PCBs peaked in the 1960s, however the effects of these chemical contaminants is everlasting.

Mothers will leave their pups on the beach for extended periods of time while hunting, making them extremely vulnerable. People and pets should stay at least 100 yards away, as some mothers will not return if there are people and pets around her pup.

Seal pup mortality is very high at around 50% in the first year. Other predators for harbor seals include transient killer whales, sharks, and Stellar sea lions. While on the beach, they can fall prey to bald eagles, dogs, coyotes, and bears.