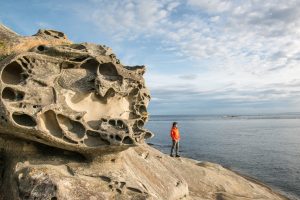 East Point, on Saturna Island, is one of the very best locations in the Southern Gulf Islands of Canada to see orcas from land. The Southern Resident Pods swim past East Point from May to November as they travel from the Pacific Ocean to the Fraser River Delta, which is one of their favorite feeding grounds. The orcas often swim very close to the sandstone cliffs, along the kelp beds on the south side of East Point and through Boiling Reef on the east side. Transient orca groups are seen throughout the year.

Copy and paste this URL into your WordPress site to embed

Copy and paste this code into your site to embed