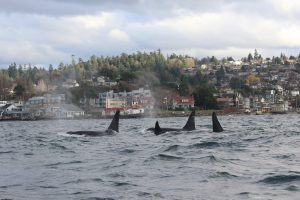 The southern resident orcas return to central Puget Sound each winter, following chum salmon runs. With the loss of three young adults this past year, the population consists of just 73 individuals. What research is currently underway and how will it help J, K and L pods? With the ending of the Governor’s Task Force, what are the next steps for their recovery?

Join us at the Whale Trail Winter Gathering to learn about current research and findings from Dr. Brad Hanson, NWFSC Lead Killer Whale Researcher, and field researchers Mark and Maya Sears. Whale Trail Director Donna Sandstrom will give an update about the end of the Task Force, and actions we can take now to help the southern residents.

Come early and get your holiday shopping done too! We’ll have great gifts for the whale fans on your list, including signed copies of Erich Hoyt’s newly released edition of Orca The Whale Called Killer.

About The Whale Trail