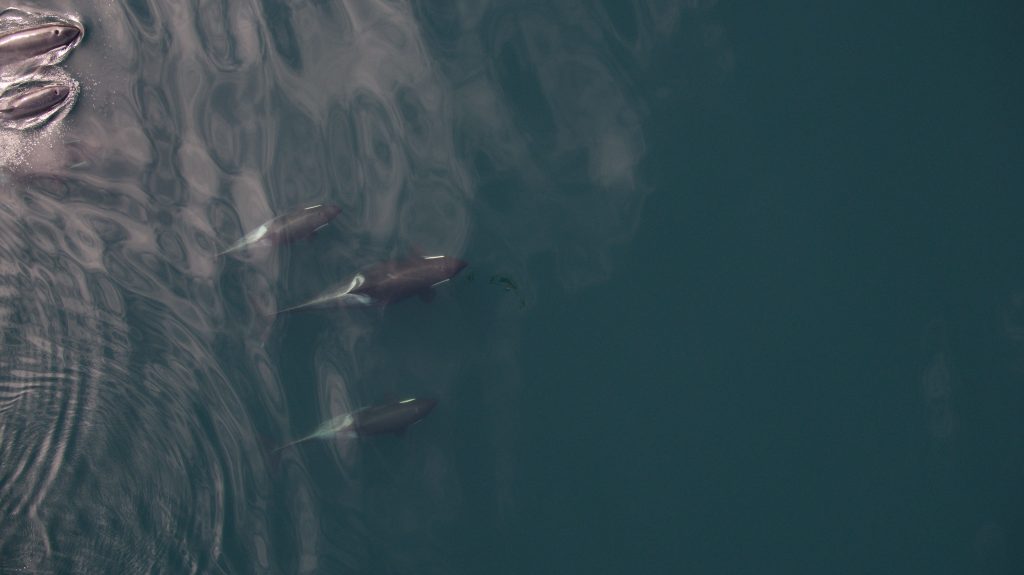 We are heading up to Telegraph Cove this weekend to celebrate the 20th anniversary of Springer’s rescue! It’s the only successful orca reunion in history, and today she has two calves of her own. Witnessing – and experiencing – how people worked together to save Springer is what inspired me to start The Whale Trail. Will the guest of honor show up? We hope so! If not, we’ll certainly be sharing lots of stories about her. Join us in person Saturday 7/23 at the Whale Interpretive Center in Telegraph Cove. Stay tuned for updates from the road!

“Celebrate Springer!” marks the 20th anniversary of the dramatic rescue in Puget Sound of the orphaned orca Springer (A73) and the heroic efforts by Washington and British Columbia teams working together to return her safely to her home 300 miles north in Johnstone Strait at the north end of Vancouver Island.

Twenty years later, Springer is thriving, with two calves of her own: Spirit born in 2013 and Storm born in 2017. They are oftenseen on the north central British Columbia coast and return to Johnstone Strait most summers.

Springer’s success will be celebrated with events in Telegraph Cove July 22 to 24. Members of the team will reconvene to give first-hand accounts of how Springer was identified, rescued and rehabilitated. The young orca was taken by jet catamaran to the north end of Vancouver Island and reunited with her Northern Resident family on July 14 2002.

“Springer’s story is an inspiration on many levels,” said Paul Spong of OrcaLab.  “It proved that an orphan orca, alone and separated from her family, can be rehabilitated and returned to a normal productive life with her family and community; and it showed that disparate parties with diverse interests can come together and work together for the common goal of helping one little whale.”

“The Springer success story continues to be an inspiration for all of us working on conservation in the Salish Sea,” said Lynne Barre, the lead for orca recovery at NOAA Fisheries’ West Coast regional office in Seattle.

“The partnerships created during Springer’s rescue provide a strong foundation for international cooperation as well as coordination between government, state, tribal, and non-profit groups to benefit both Northern and Southern Resident killer whales.”

“Aquariums are at their best when they can apply their learnings and expert resources for the conservation of threatened animal populations and individuals, like Springer. said Vancouver Aquarium Executive Director Clint Wright “This critical work has been a core commitment of the Vancouver Aquarium for 65 years.”

“Twenty years ago, Springer was rescued through the extraordinary transboundary efforts of a number of Canadian and US conservation groups,” said Jessica Scott, Senior Manager, Whales Initiative at Ocean Wise. “Her rescue, and ability to thrive since, is testimony to the importance of ongoing science and the collaborative conservation efforts on behalf of our ocean, and its inhabitants.”

“Springer’s reunion is the only project of its kind in history,” said Donna Sandstrom, director of The Whale Trail and author of the new book “Orca Rescue!” (Kids Can Press 2021) “Her continued success gives us hope, and inspires us to approach issues facing orcas today with the same commitment, urgency and resolve.

The public is invited to Celebrate Springer at the Whale Interpretive Center (WIC) in Telegraph Cove on July 23. Events include a presentation and team discussion at 11:30 AM, kids’ activities, and an eco-fair featuring marine-focused non-profit organizations from 11 to 4 PM. Admission to the WIC required.

“Springer’s amazing success continues to inspire.” said Mary Borrowman, Director of the WIC and co-organizer of the Telegraph Cove events. “North Islanders are invited to celebrate this conservation success and commit to the ongoing health of the whales, dolphins and all marine creatures who share our waters.”