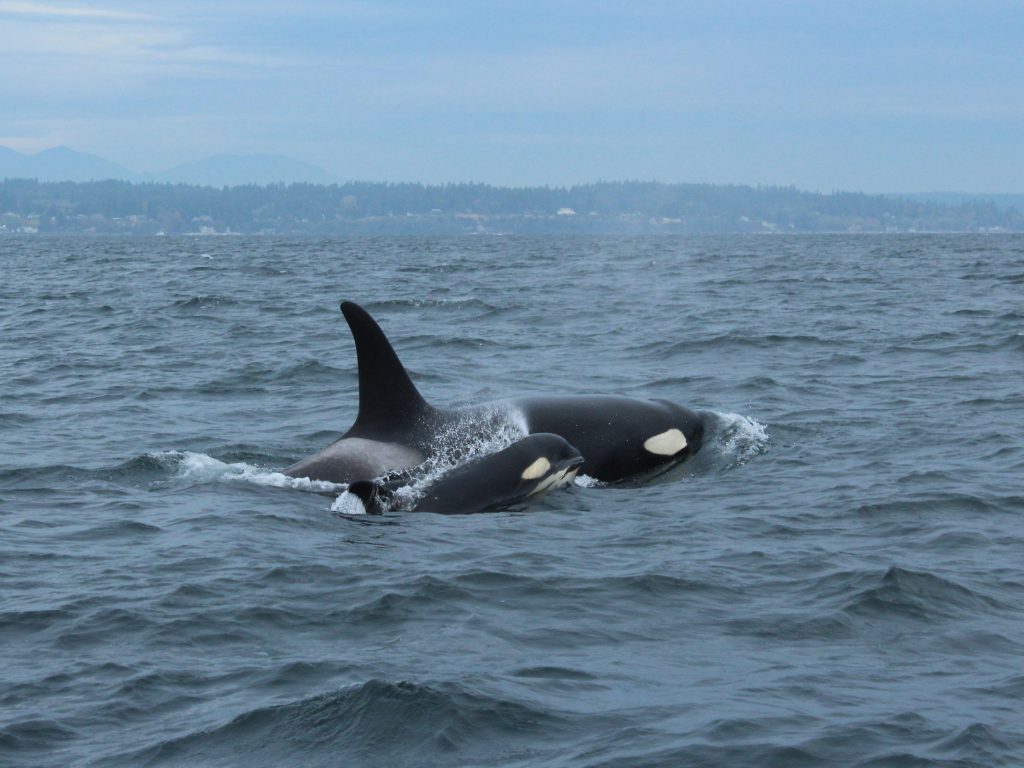 SEATTLE – September 1, 2020 – Today, national and regional conservation groups and respected environmental experts submitted a letter to all U.S. whale-watch operators requesting them to “Take The Pledge” and make a commitment to suspend viewing of the Southern Resident Killer Whale population, effective immediately.
The conservation groups include Friends of the San Juans, Natural Resources Defense Council (NRDC), Seattle Aquarium, The Whale Trail, and Washington Environmental Council.
Since 1998, the Southern Resident population has declined precipitously, to a current low of 72 individuals.  The request to operators comes at a critical juncture for the highly endangered Southern Resident population as scientists recently confirmed three pregnant orcas, including Tahlequah who garnered international sympathy in 2018 as she traveled fifteen hundred miles in seventeen days grieving the loss of her calf.
“The recent news that at least three females are pregnant is a ray of hope for this struggling population,” states Mindy Roberts, Washington Environmental Council and former member of Governor Inslee’s Orca Recovery Task Force. “Now more than ever, we need to provide them the space and quiet to successfully forage for scarce salmon, rest, socialize, and birth and raise healthy babies.”
The request to suspend viewing of the orcas complements and extends the agreements already in place since 2019 in Canada. The pledge to suspend viewing in the U.S. would last for at least one year, starting now.
A recent economic viability report prepared for the Washington Department of Fish & Wildlife, confirms that whale-watch operators “are not financially dependent upon Southern Resident Killer Whale viewing, and that the industry has remained profitable despite previous reductions in SRKW viewing opportunities over the past ten years.” Under the pledge, whale-watching can continue to operate while focusing on other whale and wildlife species. Over the past decade, while the Southern Resident orcas continued to decline, the number of whale-watch vessels more than doubled, and revenue nearly tripled.
“The science is clear, the need is clear and now the economics are clear.” comments Donna Sandstrom, The Whale Trail and former member of Governor Inslee’s Orca Recovery Task Force. “Last year while viewing was suspended in Canada, ridership on Canadian vessels actually increased. Passengers want to support businesses that are going the extra mile and doing the right thing to protect the Southern Residents. This should be an economic selling point for U.S. operators to take the pledge.”
Lack of salmon, polluted water and acoustic and physical disturbance from vessels are the major threats to the Southern Residents and will push them to extinction unless additional measures are taken. Studies show that noise and salmon availability are inextricably linked as orcas rely on echolocation to find their prey.
“Reducing human-created noise and disturbance from all vessels will have an immediate benefit for the Southern Residents,” says Michael Jasny, Director of Marine Mammal Protection at the Natural Resources Defense Council. “Other factors like working to increase the abundance of Chinook salmon is critical, but will take time, while reducing disturbance will improve survival and recovery of the Southern Residents now.”
“While we support a sustainable whale-watching industry that educates the public and inspires conservation, we ask operators to focus on other species and give the critically endangered Southern Residents additional space during this crisis,” said Nora Nickum, Ocean Policy Manager at the Seattle Aquarium. “We need to give the pregnant orcas the best possible chance at having healthy, thriving calves.”
By taking the pledge, whale-watch operators commit to not plan or route trips to view Southern Residents, staying 1/2 nautical mile (1,000 yards) away from the whales for a year. According to the Washington Academy of Science, 1/2 nautical mile distance is the least likely to cause disturbance. If Southern Resident orcas are incidentally encountered while viewing other whales, operators would not approach or follow. If Southern Residents are encountered in transit, operators would slow down to reduce noise, but keep going.
In exchange for taking the pledge, the environmental organizations will publicize any commercial vessel operators that make the conservation commitment. Recreational boaters are asked to take a similar pledge.
“Recreational boaters also have an important role to play in protecting the Southern Residents and we encourage all sail and power boaters, kayakers, and jet skiers to take the pledge and provide these whales with more space to thrive,” said Lovel Pratt, Marine Protection and Policy Director at Friends of the San Juans. “People can watch the whales from shore without disturbing them.”
Suspending viewing of Southern Residents by all vessels remains a recommendation of Governor Inslee’s Orca Recovery Task Force as a critical step towards orca recovery.
###